Mark has an innovative and professional approach to his craft - a friendly and fun guy to work with.

Mark’s got the kind of demeanour that makes working in the studio effortless - you can't ask for much more than that!

For as long as I’ve known Mark he’s been a player who pushes boundaries, along with his band The Arusha Accord, with a complex approach that sacrifices none of the groove or musicality.

I have no idea how Mark remembers the Arusha drum parts, or maybe more accurately, I don’t think many people out there are cut out to put this kind of investment into their art.

Mark is an incredibly proficient drummer and musician who has often twisted my perception of what is humanly capable.

Mark is a really fun drummer to work with! He manages to take incredibly awkward parts and turn them into something that sounds natural and has a great flow.

A mathematical master who combines groove and aggression with ease. An animal behind the kit.

Ali Richardson
Sylosis / Bleed From Within

Mark’s stellar talent and ability to perform is phenomenal, and matched only by his work ethic and dedication.

Mark’s professionalism and dedication to his instrument is paramount. He is a fantastic performer that I would recommend to anyone; a highly comfortable person to work with who will certainly go far in the industry.

He’s just insane, the guy is a machine! He’s the one take wonder that you need in a studio without an ego.

Mark is an octopus with a human’s brain.

Craig Reynolds
The Haarp Machine / Stray From The Path

A naturally creative and forward thinking player; I have always found Mark to be highly efficient and to think outside of the box with his approach to drumming.

I would recommend Mark as a suitable drummer for any serious artist who wants reliability, firm playing and total professionalism.

Mark’s a pleasure to tour with and a lovely guy - a technically brilliant drummer whose drum parts in The Arusha Accord always blew my mind.

An all-round lovely chap. I’m proud to know him and see him constantly evolving on the drum set.

I heard Mark drumming and thought he was outstanding: rock solid and fluent, with many personal touches. I immediately took the opportunity to ask if he could take the stool for several important gigs.

An amazingly gifted drummer, and a really great, down to Earth dude.

Mark always played with a completely reliable confidence and made a point of learning the drum parts exactly as they had been delivered on recordings, only putting in his own (excellent) flourishes when invited to do so.

I have worked with Mark and say repeatedly, he’s one of the best drummers I know and his versatility and professionalism knows no bounds.

Born in Reading, United Kingdom, Mark started drumming at the age of 4 then took up private lessons through the Berkshire Music service from 7 years old. At the same time as also taking piano and recorder lessons, drumming quickly turned into a deep rooted passion for Mark. His parents also surrounded him with all the genres a young motivated drummer needs; from Phil Collins, Jamiroquai and Deep Purple, to Yes, Weather Report and Dave Brubeck. 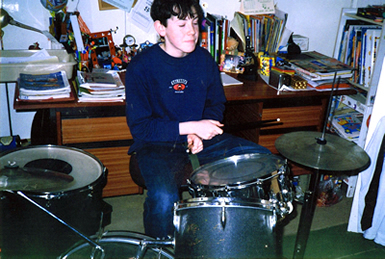 Classically trained in orchestral percussion from a young age and involved in Brass & Wind bands as well as the Berkshire Young Percussion Ensemble led by Andy Leask, Mark took part in fantastic opportunities at the Royal Albert Hall (as part of the Music for Youth Proms final), Reading Hexagon and Basingstoke Anvil.

At 13 Mark formed his first band and had his first experience of a recording studio, recording two EPs with the group.

As a teenager Mark had lessons in Jazz and Swing through Andy Leask, who introduced Mark to an array of fresh musicians and techniques.

Mark is best notably known for drumming with The Arusha Accord. With multiple releases on Basick Records, the band has toured extensively throughout the UK and across Europe, having gained fans worldwide with their virtuosic and extremely technical sound.

Mark was able to stretch his potential even further by graduating in 2015 with a 2:1 BA (Hons) in Music from Oxford Brookes University, where his gift to move between genres fluently with different projects and musicians was strengthened and used to its best ability. Among these were the musical theatre productions of RENT, Spring Awakening, Footloose and Rock of Ages.

His entire musical past has helped shape Mark into the player he is today: A hugely driven musician who has acquired an arsenal of experience in all areas of drumming as an independent musician. Mark’s encounters within the industry have culminated in making sure that drumming has, and always will be an exciting and ambitious career for him.

Please go to Mark’s SoundCloud account for more information on these tracks.

The equipment Mark uses varies on the style of work, but will be a selection from the following:

With an easy going personality, wide flexibility and super tight feel and groove, Mark has been the first choice for many aspiring singer-songwriters, bands, and musical directors throughout his career. Having the balance of being an extremely approachable colleague but also a perfectionist at his craft whilst staying relaxed, makes him a unique session artist in whatever environment he is placed.

Mark is fully conversant with metronome recording and prides himself on keeping a consistently tight but open feel to his playing. His ear for the groove and what suits the recording is only matched by his determination to deliver the best for whatever project he is working on.

Marks live performance opportunities have taken him up and down the UK & across Europe, playing at festivals such as Wireless, Edinburgh Fringe, NASS, Brutal Assault, Tech-Fest, Indietracks & Ghostfest.

Both LIVE Performance / Studio rates will be dependent on many factors. Please email for a quote, and to discuss your project.

Marks ethos for teaching stems from creating a solid framework to firstly build strict technique, a musical ear and a strong inner sense of pulse. Lessons are tailored to each pupils needs and aspirations. For those wishing to study drum kit grades, all exam boards are welcomed including Rockschool, Trinity Rock & Pop, and Trinity College.

Rates for private lessons are £34 for 60 mins (as advised by the MU), and come with a 24hr notice period for any cancellations.

Please email Mark for a quote or to discuss your project by using the message box below.